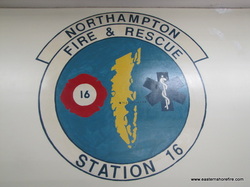 The Northampton Fire & Rescue was organized and incorporated in September 1964, under the name "Northampton County Rescue Squad, Inc."  Located near the center of Northampton County, the town of Nassawadox is home to Riverside Shore Memorial Hospital.

At it's inception, the company was established to provide ambulance service only, with 25 volunteers trained in Red Cross - First Aid.  By September 1965, the first fire apparatus was obtained, and a 2,000 gallon tanker was placed into service that same year. Due to an increase of call volume, a second ambulance was added to the fleet in 1967.

The present brick station was constructed in two separate phases. The original north (right) portion, was completed in 1978 and included three (3) engine bays, which presently house the Ambulance, Engine, Tanker and support units. The single, south (left) apparatus bay, added in 1991, houses the company's Brush and Utility truck. The 1991 construction project also included a large addition to the rear of the building, which more than doubled the size of  the existing community/bingo room. Other station amenities include a communication/watch room, kitchen, restrooms, and various storage & office areas. A combination bunk room/lounge area for the personnel, is located on the second floor; above the kitchen.

To raise money for the company, Bingo is held throughout the year, on each Thursday evening at 7:30 p.m, doors open at 6:00pm. this provides a much needed income for the company, since the allocation from Northampton County is very limited. Another major fundraiser for the membership is a Bi-annual Trail Ride (Spring & Fall).

Northampton Fire & Rescue - Station 16 operates a fleet of six (5) modern apparatus, including an Engine, Tanker, Brush Truck, Support unit and a Utility Vehicle. The members typically respond to an average of 200 fire calls.

We are always accepting new membership, if interested please fill out an application and come by the Station! Members are there for training every Monday starting at 7:30pm. ​